A vasectomy is a commonly known procedure for permanent birth control among men – while it is a very safe and effective method, many people in Australia’s most populous city are concerned about what it entails and how to prepare and recover from the operation. To answer these queries, here are a few facts about getting a vasectomy in Sydney: 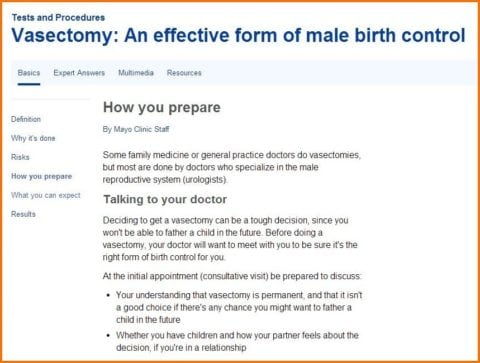 Vasectomy is Safe and Effective

Generally, this procedure is already very safe, and in the hands of professionals from established practices like Sydney Vasectomy Services, any minimal risks are decreased even more. Its effectiveness is so high that according to some studies, there will just be about 15 to 20 cases of pregnancies in 10,000 patients. As a matter of fact, there is a much higher risk of conception from condoms and other contraceptives.

It pays to take note though, that the contraceptive effects of a vasectomy isn’t immediate, so you might want to abstain for a while until your urologist gives you the green light. At most, it can take about 12 weeks to ensure that all viable sperm is eliminated in one’s system. One of the most efficient ways to check for this is to have semen samples analysed for the presence of sperm.

Some men are also concerned that this procedure might end up taking a significant toll on their sex drive, but the truth is that it has little to no effect on libido. Vasectomies also do not affect testosterone levels and erectile function. Instead, it only serves to impede men’s ability to impregnate, without adverse effects on one’s sexual health.

According to Mayo Clinic, here are some of the things you should do before the procedure:

Stop taking aspirin or other blood-thinning medications several days before your surgery. These can include warfarin (Coumadin), heparin and aspirin and other over-the-counter pain medications such as ibuprofen (Advil, Motrin, others).

The day of the surgery, use scissors to cut the hair around the surgery area. Then shower or bathe, being sure to wash your genital area thoroughly.

Since a vasectomy is, by definition, a type of surgery, expect to be unable to go to work for at least a few days to allot time for recovery. Avoid heavy tasks such as lifting or running at the gym for at least a week after the procedure. During the first two days, make sure to apply ice packs near the surgery area to reduce the swelling or pain.

With the help of a Sydney vasectomy procedure, you can have the peace of mind that there won’t be any unplanned pregnancies in the future.