As global population levels continue to increase, birth control remains one of the biggest health issues in the world today. NOW Toronto recently published an article detailing different views from counsellors and health experts about the matter, especially with regards to the effectiveness of today’s birth control methods.

While they have different perceptions about the concept of birth control, they agree that condoms and pills aren’t always reliable and that vasectomy is still the most effective form of male contraception. 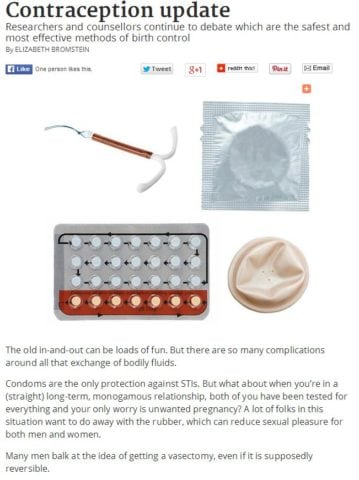 The latter claim is easier to understand if one takes a closer look at the procedure: vasectomy essentially prevents sperm cells from reaching the seminal fluid by severing or obstructing the vas deferens. By contrast, condoms attempt to block the seminal fluid from reaching a woman’s ovum, while pills try to suppress the male hormones that induce the production of sperm cells.

Both methods are limited by certain factors (i.e. condoms’ durability and tightness and pills’ reactivity to the body) and can still result in unplanned pregnancies, but such risks and limits aren’t present in a vasectomy.

The specifics on how the procedure is done can vary from one medical expert to another, although some practitioners of vasectomy in Sydney, like Dr Harold Judelman of Sydney Vasectomy Services, perform no-scalpel vasectomies that are just as effective, yet much quicker and less painful, than traditional ones.

Unfortunately, vasectomy isn’t as popular as condoms and pills despite its effectiveness. In fact, only about six percent of contraceptive use in the world involves a vasectomy. One of the purported reasons why the procedure is avoided by men is fear, which is logical because a vasectomy is essentially a type of surgery.

However, working with a Sydney vasectomy service only lasts for a day, yet the results it can produce are more permanent than other contraceptive options. Through a vasectomy, a man can enjoy a healthy sex life without the fear of having an unplanned pregnancy. Most health experts seem to agree with this statement.