Vasectomy is an invasive procedure, but major medical breakthroughs have now allowed this to be performed without incisions, and therefore, with much reduced bleeding and pain. The less invasive procedure is called “no-scalpel vasectomy” (NSV), and has found its way to more than 40 countries, including Australia. An article in the WHO Reproductive Health Library (RHL) discusses the procedure in detail. 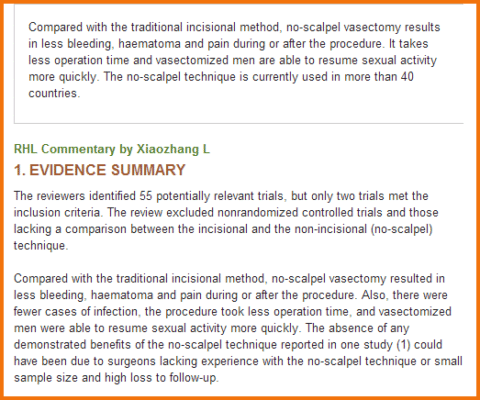 History
Vasectomy first gained public attention in the early 1900’s as a means for “eugenic sterilization”, or the sterilisation of men who were considered “defectives” or “socially undesirable” in some European countries. The use of vasectomy for family planning gained recognition in the 1930’s, and has since become a popular birth control method all over the world. In Australia, a vasectomy in Sydney and other places is performed in one out of every 4 men each year.

Vasectomy involving incision has always been considered an effective and inexpensive contraception method, but has turned away many men who were anxious about the resulting pain and bleeding. In 1974, NSV was developed in China by Li Shunqiang as a response to fears regarding incision vasectomy. Since then, over ten million Chinese men have undergone NSV.

Procedure
A vasectomy doctor will engage the patient in preoperative consultation despite the fact that the procedure is minimally-invasive. Existing conditions such as AIDS, diabetes, and scrotal injury may warrant a delay in the procedure pending treatment, or may disqualify a patient altogether.

The actual procedure involves the doctor making a small puncture into the skin, through which he can reach and sever or cauterise the vas. Because no incisions are made, there won’t be a need for suturing. Working with a puncture instead of incisions also results in very little bleeding and a much faster healing time.

Implementation
The RHL article says that NSV is slowly becoming a standard method for male sterilisation worldwide, including in countries where rapid population growth is a concern, such as India and the Philippines.

Advisory
It’s important to note that vasectomy, no matter the form, is generally irreversible. Before getting the procedure, therefore, it is best to have a thorough discussion and consultation with a reputable Sydney vasectomy clinic like Sydney Vasectomy Services. Trusted facilities such as this can present the different options open to you, and help you make an informed decision.