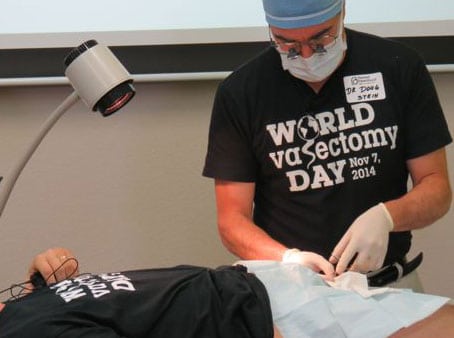 Among the handful of birth control methods available to men, vasectomy is often the least discussed option— if it’s discussed at all. Misconceptions about this relatively simple procedure are why vasectomy is often shoved under the rug by couples, even those who are no longer planning to have children. Reasons like this have inspired the creation of World Vasectomy Day, which aims to raise awareness of the fact that vasectomy is an effective method of birth control. One of the two co-founders of this global movement, Jonathan Stack, tackles the advantages of having a vasectomy, in a special contribution to CNN:

From a medical perspective, a vasectomy is a simple procedure that takes about 15 minutes. The doctor severs the vas deferens and then seals up both ends, thus preventing sperm from reaching your semen. It has a less than 1% failure rate, compared with 18% for condoms, making it an important option for men whose families are complete.

But if ease and effectiveness don’t convince a man of the benefits of vasectomy, there are many compelling sociological and health reasons as well. For example, 51% of pregnancies in the United States are unintended, and these pregnancies come with adverse maternal and child health outcomes, such as delayed prenatal care and an increased risk of premature birth. Poverty and family are also correlated, with double the incidence of poverty in nine-member households than in four-member households.

Australia is one of the thirty countries pledged to join the annual observance of World Vasectomy Day. 2014’s WVD may be over, but it remains in the best interests of men in and around New South Wales’ capital to visit a Syndey vasectomy specialist to learn more about the procedure.

A physician can thoroughly discuss the many advantages of having a vasectomy done. It remains to be the most effective option available for men who no longer want to have children. The procedure is also less invasive than other surgical and chemical birth control alternatives, ensuring maximum safety for those who undergo it.

For men who want to eliminate the stress brought about by fear of an unintended pregnancy, visiting a vasectomy clinic in Sydney can help sort out their options. Clinics like Sydney Vasectomy Services can provide all the information needed by those who are considering vasectomy as the solution to birth control concerns.