While many Sydney parents want more than a couple of kids, some just can’t cope with having too many, to the point that they decide to draw the line even before living together. This kind of long-term plan, however, may fail as future circumstances might change a couple’s mind. Simply put, no arrangement can guarantee a safe, simple, and permanent method of birth control better than a vasectomy. 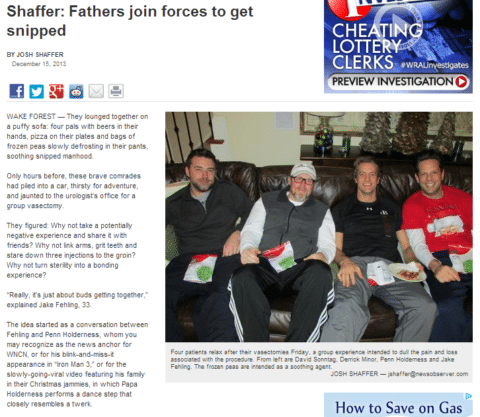 Vasectomy is a procedure that prevents the release of sperm during ejaculation.

Although this is tagged as the safest and most effective of the known contraceptive methods, vasectomy is not for everyone, especially not for those men whose wives and themselves prefer having more children. In an article for NewsObserver.com, contributor Josh Shaffer reports on the rather fun and manly experience of four fathers who underwent a vasectomy.

“Here’s the thing about a vasectomy: It takes about 8 minutes. Getting your teeth cleaned at the dentist can last an hour. But kinking the hose from which all life flows can require less time than boiling an egg.

Oh, we have kids that we adore but our wives don’t want any more so they sent us to the snippy store It’s Friday, we’re getting a vasectomy!

From my vantage point, the level of manliness hadn’t dipped at all among this group. If anything, it has escalated. Here were four brothers joined in a painful rite of passage, crossing the bridge to middle age like Vikings over a stormy sea.”

No matter how simple and painless a vasectomy in Sydney is, candidates should be absolutely certain of their decision lest they regret getting snipped later. In addition, the simplicity of the procedure does not take away the fact that it still has to be performed by a skilled general practitioner in a reputable practice, such as Sydney Vasectomy Services. Otherwise, good results may not be guaranteed; in some cases, negative side effects may even emerge.

When carried out by a skilled practitioner, a Sydney vasectomy procedure may take no more than ten minutes. The recovery period can be short as well, allowing a patient to swiftly go back to his normal life. Men who are short of funds can use their Medicare benefits to cover the initial consultation on vasectomy and full aftercare service. The absence of invasive steps in the process makes vasectomy a safe and effective procedure.