Getting a vasectomy can be one of the most critical decisions a man can make in his lifetime, as undergoing the procedure will mean permanently giving up his ability to procreate. While many consider the method as a safe and effective means of controlling population growth, there are those who are not keen on having a vasectomy because of the supposed pain it entails.

Does A Vasectomy Hurt

However, In a recent article for The Huffington Post, reporter and writer Marco Gonzales shared his hassle-free experience of getting a vasectomy:

… First thing he did was numb the area with anesthesia which was probably the worst part. Basically, he injects the needle into the left nutsack. Not going to lie, the poke hurt a bit, but the slight pain quickly vanished once the anesthesia kicked in. Then, basically all you feel is a bit of tugging while the doc does his thing. Definitely an odd feeling, but thankfully not painful.

… The doc then said, “Ok, we’re all done. Now for the other side.” FML. And there went the anesthesia into the other ball. Ten minutes later, he was done with that side.

Honestly, it was over in 20 minutes total, and it wasn’t that big of a deal. The little hole he put into the area to reach the tubes he needed to alter was a little bigger than a pin prick. No gushing blood. No sharp pain. … 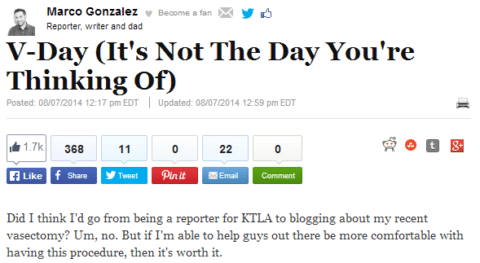 Many established providers of vasectomy in Sydney, such as the Sydney Vasectomy Services that Dr. Harold Judelman operates, offer an outpatient experience similar to what Gonzales had when he visited his urologist for the procedure. These clinics are equipped with the necessary medical tools, devices, and furnishings to conduct a safe and painless operation. The professionals involved are also constantly updated on the latest methods; they get continuous training as well to refine their skills so that their patients are always in safe hands.

Licensed Sydney vasectomy clinics make sure that every patient receives the necessary information and support before, during, and after the operation. Urologists would offer advice to men who have undergone the procedure on what to do when they feel the pressure of sperm buildup in the epididymis, prescribing anti-inflammatory medication as needed. These clinics also assist men with post-procedure semen analysis sessions to ensure that the vasectomy is a success.

While there are parts of the procedure that would entail sensations no stronger than ant bites, men can be assured that vasectomy is otherwise painless, especially if performed by an experienced physician.